I’m back… finally! With good news and bad news. The bad news is that I won’t be able to work for a while- but that’s also good news because it gives me a chance to really focus on what I’m learning.

So… on to things that matter!

I hadn’t visited too many of the top restaurants’ sites lately, so my first port of call was The World’s 50 Best Restaurants. I’ve visited quite a lot of the websites of the restaurants on the list, but I just focused on the top ten this time around. Yes, it’s a real thing, and yes, it passes for real gossip when you’re working in a kitchen! 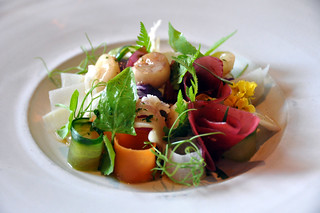 noma was at the top of the list, and I really loved how clean the website was. I thought that it suited the public perception of the restaurant perfectly, and I wasn’t surprised by the look the site at all. The navigation was easy to use, and I liked that the blog opened in a separate tab. It surprised me that while this was the most minimal site that I visited, it’s probably the one that I liked the most. Saying that, I think the fact that noma is so well-known means that they don’t need to use their website so much to entice people to visit, as they do to supply information. (Literally, their website could be plain html- no styling whatsoever, and it would not make a difference- it’s still the number 1 restaurant in the world.)
[Side note: the photo’s from an amazing photographer, follow him on flickr!]

Eleven Madison Park (that’s one of their dishes on the left) and The Ledbury both had websites that I really enjoyed looking at, and were easy to use. I especially liked the way the Eleven Madison Park site displayed on my mobile- I just thought it was clever that they’d removed the photos, but when you stay on the page for a few seconds with no action photos fade into view! I thought that was a brilliant way of including photos that wouldn’t be as obvious, or encroach too much on a visitors’ experience when browsing the site from a mobile device. The display of information also changed slightly- in sections of the site where you’d had to click (on the desktop version) to view more information, all of the information was on display automatically.

I did see a few sites that I wasn’t crazy about, which was really good. It reinforced the importance of clear navigation, as well as the need to balance form and function.

In between ‘life stuff’ I’ve made a start on a site that I’m using as practice, so I’ll get another update post started tomorrow.